How much respect do you get when you go back to your hometown to visit family and friends?  Do they understand who you’ve become?  Jesus knew that we don’t automatically get the respect that we’re due in our hometowns.  It was the same for Him in His day.

We read about it in Mark chapter 6 and verse 4 where it says, “Only in his hometown, among his relatives and in his own house is a prophet without honor.”  Even for Jesus, the Son of God, this truth of human relations was true.

You can be the player of the year, a hall of fame performer, the MVP on your team and people back home will still remember you as the person you were in grade school.  Family will still refer to you as your parents’ child.  It seems a little disrespectful and it’s frustrating to endure.

What should we do when this occurs?  Be who you are and don’t worry about it.  It’s just natural for them to think this way.  Many times, the folks back home just don’t get it.  Rather than taking offense, treat it like your little secret.  Love them and relate to them in a way they can handle.  Sooner or later, they’ll wake up to who you are and you’ll be afforded the respect you deserve.

Heart of a Champion 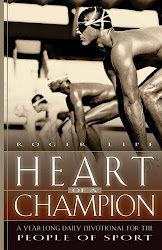 Daily Devotions for the People of Sport

The Competitor's Book of Prayer

Now available in paperback or on Kindle from Cross Training Publishing or Amazon.com